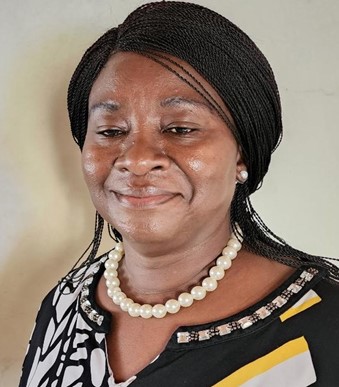 Dr. Ivy Efua Sackey is a Fellow of the West African Post Graduate College of Nurses/Midwives, a capacity builder, teacher, and an inspiring leader who is passionate about general nursing, adolescent, and women’s health, reproductive, maternal, and child health issues. She is also a member of the Institute of Directors (IoD) Ghana, and is a gifted strategist who takes a holistic approach to transforming organizations through resource identification, project management, partnership development, and workshop facilitation on regional, national, and international bases.

Ivy is married with three children. She was born in a small town called Swedru, located in the central region of Ghana. From an early age, Ivy took great delight in helping others, so it was only natural that she felt drawn to a career in nursing/midwifery as she grew up. After completing secondary school, she gained admission to the Cape Coast Nursing College in 1984, completed the program in 1987, and obtained a license as a State Registered Nurse. After working for a year, she proceeded to pursue a one-year midwifery course at Korle-Bu, which she completed in 1989 and was then awarded a license as a State Registered Midwife.

Following her extensive ward experience as a senior staff nurse/midwife in some of Ghana’s largest hospitals (Komfo Anokye in Kumasi and Korle-Bu teaching hospital in Accra), she decided to continue her education at the University of Cape Coast to enhance the teaching she was providing in the clinical area. This tilt to teaching saw her transition from hospital ward duties to classroom duties as an educator and mentor teaching nursing-related disciplines such as pediatrics, obstetrics/maternal health issues, and, among others, pharmacology to students and nursing/midwifery professionals. Ivy was the chairperson of the Maternal and Child Health faculty of the West African College of Nursing/Midwifery (WAPCNM) between 2009-2015, and then, substantive secretary of the Ghana chapter of WAPCNM from 2007 to 2009). Extensive lecturing afforded Ivy a closer relationship with her students who – through the sharing of their experiences during clinical supervision – piqued her interest in preceptorship.

She enrolled in Sexual Reproductive Health Course in May 2014 to Jan. 2015 with Geneva Foundation for Medical Education & Research, World Health Organization. From 2005 – 2006, she pursued and successfully completed a Master of science in Population and Reproductive Health, International Health, at Queen Margaret University in Edinburgh, Scotland.  Ivy taught in the Sekondi and Korle-Bu Nurses and Midwifery Training Colleges (NMTC) where she trained and mentored over three thousand nurses/midwives. Ivy has conducted research, written papers and delivered speeches, and her interest in researching preceptorship stemmed from the experience she gained while teaching at the training colleges and from working as the Head of the Nursing/Midwifery Training Institutions unit at the Ministry of Health (MoH) in Ghana. Through visiting hospitals and clinics used by the training colleges, Ivy observed several issues with the process of clinical supervision which revealed a broken system. Some of these issues included the preceptorship programs that were supervised by the department, but which were not well-established. As of October 2020, Ivy holds a Master of Arts in Leadership and Change and a PhD in Leadership & Organizational Change from Antioch University, where her research aim was to help identify and understand the problems with the preceptorship program in detail in order to improve the program. Indeed, Ivy’s resulting scholarly research greatly contributes to closing the gap between clinical theory and policy development. Through her PhD program, Ivy has been able to make huge strides in this endeavor and is has shared her findings with the relevant bodies and in the implementation phase in Ghana.